Posted on April 9, 2013 by hektorrottweiler 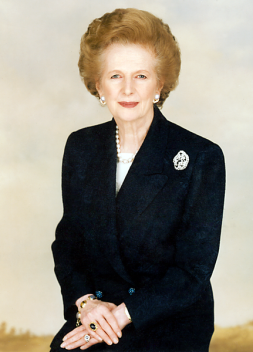 The true horror of Margaret Thatcher could be seen just to look at her. She was a solid wall of pure thickness, of utter, cosmic stupidity. She had no sense of humour because she had no wit, and no purchase on any sort of ambiguity whatsoever. She saw everything in the same concrete terms at all times and could not be persuaded otherwise. She re-modelled the world in her own image by sheer persistence, as anyone who might ever hope to be critically engaged with her was eventually smothered by the expanding might of her malevolent will.

Thatcherism is not only hegemonic, she herself was hegemony. In part this is why her death is significant, because neo-liberal hegemony in the UK became quite literally embodied in her person.

Margaret Thatcher may well have been a human being (albeit a world-historically crappy one) but she was also a wall that must have things flung at it, and be torn down. And a symbol of what has now become the evil spell cast over us all.

People like Thatcher (though she was a particularly dangerous example of this sort of individual) set themselves up as utterly rigid in a game that is usually at least in some measure dynamic. I don’t really know what the best way to deal with them is, or would be. But a step in the right direction might be at least recognising that the game (despite them) remains dynamic. Capitulating to the stupid and unimaginative can only make us more stupid and less imaginative, and this is in part exactly what Thatcher did to the world, in being allowed to make it like herself.

This entry was posted in Infinitely Full of Hope. Bookmark the permalink.